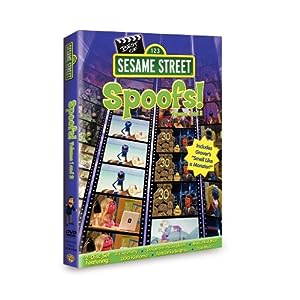 As a child, I loved Sesame Street.  As an adult, I still love it.

One of the cool things about Sesame Street is that it has always been written on two levels—one for the child, and one for the adult in the room.  And since I am usually watching with my kids, when the television is on, I appreciate that Sesame Street attempts to entertain me as well educate my children.

Because Sesame Street attempts to entertain adults as it educates children, it has long been known for spoofing popular shows.

In this two disc DVD set, there are episodes for Sesame Street fans of all ages.  The first volume has classic clips, such as Hill Street Two’s, Born to Add, and Monsterpiece Theater: Gone With the Wind.

Also included as a DVD extra is Sesame Street’s recent viral smash hit of the The Old Spice commercial.

Mister and Sister both really enjoyed both DVD’s and were only irritated that I wouldn’t let them watch them back to back.  I loved that the classic and current spoofs were separated onto two discs.  The classic spoofs, on disc 1, are well loved favorites.  The current spoofs, on disc 2, are okay, but some of them I just didn’t catch the spoof of, because I am not familiar with the shows being parodied. Overall, though, the set is certainly entertaining, and worth watching.

My favorite part is on the classic disc, and it is the Born to Count parody of Bruce Springsteen’s song.  Of course, Born to Count is done by none other than the Count.   I also loved the fact that the DVD’s were not over Elmo-fied!

The kids favorite part was on the current disc, and was the Six Feet Under parody, where the Count watches six feet under the table.

Either would make an excellent Christmas gift for the Sesame Street fan in your life.