Have you ever read the account of the Proverbs 31 woman and felt guilty because you could never measure up? Or read it and rolled your eyes because it is an unattainable standard? What if I told you that Proverbs 31 doesn't just describe the woman you could be… but that it describes the woman that you are? Lauren Crews makes that assertion in her Strength of a Woman book.

Stregth of a Woman

I'll confess that I've read the account of the Proverbs 31 woman countless times. I've also prayed many times, Lord, make me a woman of noble character. I want to BE the kind of women whose husband has full confidence in her, who is clothed with strength and dignity, and whose children rise and call her blessed. I've often thought that being the kind of woman described in Proverbs 31 is something worth striving for.

Lauren Crews earned her master of divinity from New Orleans Baptist Theological Seminary. She has served in women's ministry, speaking ministry, and writing Bible studies. She is also a teacher and adjunct professor. Her passion for Bible study and research spurred her to write Strength of a Woman.

Strength of a Woman Book

Each chapter of Strength of a Woman expounds on the letter that begins the verse in Hebrew, as well as the image associated with it, and why those pictures describe how God sees each of us women today. 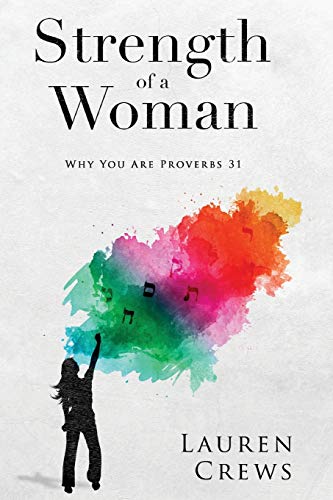 Strength of a Woman: Why You Are Proverbs 31

Strength of a Woman Devotional

The Strength of a Woman Devotional is a 31-day journey through the Proverbs 31: 10-31 passage. It can easily be understood and used as a stand alone devotional, but using it with the book is ideal. 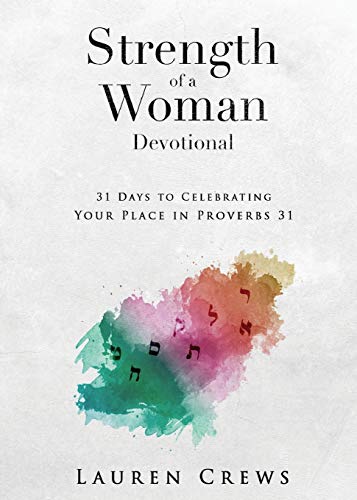 Strength of a Woman Devotional: 31 Days to Celebrating Your Place in Proverbs 31

Strength of a Woman is a unique look into the familiar proverb that has come to characterize the Proverbs 31 Woman, or the Wife (or woman) of Noble Character. It demonstrates that Proverbs 31 is not so much a checklist of desirable traits as it is an attainable description of a Godly woman. It can be applied universally to all women of God, not just wives and mothers. This book lends fresh perspective to a passage that is so familiar to so many of us. It is easy to read and it inspires confidence that we truly are created to be(come) women of strength.

The author's knowledge and understanding of the Hebrew language is evident in her writing. I really appreciated this study, and have given copies to quite a few friends already. The book is great for independent study, but would also be ideal for a group study. Anyone want to zoom or Facebook Chat? Grab a copy and hit me up. 😉

Be sure to check out my free printable Godly Reflections devotional while you're here, too. You can work on it while you wait for your book to arrive.