This post was originally sponsored by Natrol, in February 2017.  Opinions are all my own.  I continue to purchase Natrol Extra Strength Turmeric and use it daily.

Ever wake up with the old folk song, The Old Gray Mare, circling through your mind on repeat?

I have. In fact, it felt like it became my theme song for the last half of 2016. Which was ridiculous, because I was only forty years old. I should NOT feel like I’d been put out to pasture! As I was chatting with an older friend of mine, she touted the many benefits of taking a turmeric supplement. While I was a bit doubtful, I was willing to try just about anything for a swift boost in the healthy inflammation response department. So, I bought some cheap turmeric capsules and started taking them. After a few weeks, I hadn’t had quite the benefit I’d hoped for, so I told my friend. She confessed that she takes five or six capsules a day to get the benefit she desired. 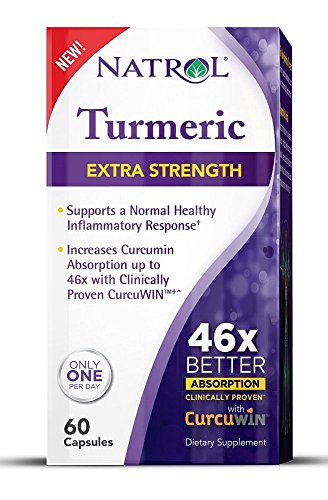 Um. Nope. I wanted a better Turmeric supplement. Which is where Natrol Extra Strength Turmeric

, featuring CurcuWIN®, came into the picture.

provides support for a healthy inflammation response, heart and joint health. The majority of turmeric products in the market place are not easily absorbed by the body (which I discovered for myself).

Natrol Extra Strength Turmeric features CurcuWIN®, a proprietary form of curcumin that increases absorption of curcuminoids. CurcuWIN has been clinically shown to be absorbed 46 times more than 95 percent standardized curcumin extract. It has demonstrated longer sustained periods of curcuminoid availability at high levels of concentration that gives the body potent antioxidant protection for cellular health.

that I did with multiple capsules of the other brand (shhh, don’t ask how many).  Natrol Extra Strength Turmeric with CurcuWIN® for the win!

Natrol LLC is one of the nation’s leading manufacturers of vitamins and supplements. Established in 1980, Natrol produces quality vitamins and supplements including herbs and botanicals, multivitamins, specialty and sports nutrition to proactively manage and maintain good health. The Natrol family of brands includes Natrol, MRI, PROLAB, Laci Le Beau, NuHair, and Shen Min. Products are available in health food retailers and other online retailers. Natrol distributes products nationally as well as internationally in over 50 countries. Visit www.Natrol.com for more information.

I get my Natrol

†These statements have not been evaluated by the Food and Drug Administration. Natrol product is not intended to diagnose, treat, cure or prevent any disease