As a member of the Fitbit blog team, I was recently introduced 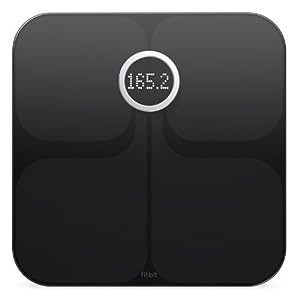 to the Fitbit Aria, a Wi-Fi Smart Scale.  We all know how much I love my Fitbit Ultra, so adding the Aria to my arsenal was exciting.

Let me tell you, this scale is Sa-weet!

Seriously, it is pretty cool.  Set up was easy, simply remove the paper from the battery compartment, insert batteries, and download the Fitbit Aria software.  Fitbit then guides you through the set up.  It did take a minute to set up, because our Wi-Fi router is in the basement on one side of the house, and the scale is in my bathroom on the other side of the house.  But, once it was set up, it was ready to roll.

So, in the mornings, I get up, take care of business, then step on the scale.  The display screen is backlit, so if I step on in the dark, I can still see the numbers.  The Aria does the rest for me.  And by the rest, I mean, she automatically sync’s to my Fitbit account and uploads my weight and body fat percentage, then she calculates my BMI as well.   I can view all three on my Fitbit dashboard, and monitor my progress with the handy dandy charts available on my FREE Fitbit account.  Here’s a peek at my weight log.

That’s pretty cool, right?  I think so, too.  In most cases I love that my weight is automatically recorded.  Most.  LOL.  But, since I am all for honesty, I will say that there are days when I trot my not-so-happy hiney to the computer, log into my dashboard, and hit that little “X” button to delete a weight.  Especially when Aunt Flo drops off her water bags for me to carry around for a few days.   I don’t want the water weight affecting my calorie budget, KWIM?  I also had to delete a couple of Hubs weights when he used the Aria.  We were SO close in weight, and he wasn’t set up as a user on the scale, it recorded his weight as mine.  Once I figured out what was going on, I invited him to be a user on the scale.

The Fitbit Aria retails for $130, is available in black or white, and can be purchased on Fitbit.com or on Amazon.

I know what you’re thinking… $130 for a scale?  Indeed, that is serious bank, but this scale does more than just tell you how much you way.  It is a great way to track your progress and keep yourself motivated, because it takes the work out of tracking!  Seeing that downward trend on the graph is enough to make me smile!  This scale, paired with my Fitbit Ultra, will help me attain my fitness goals.

The only thing I would change about it, is I would add the ability to track % Total Body Water, % Muscle Mass and Bone Mass.  I have a scale that tracks those numbers, as well, and like being able to see the total picture.