As you know, March is National Nutrition Month, and we couldn’t celebrate without the help of Buddy, Tiny, Shiny, and Don.  We used the Have A Brachiosaurus Picnic downloadable PDF for ideas and made a Sauropod Sandwich- we used slices of whole wheat bread and cut them into the shape of a dinosaur (with a cookie cutter) and spread with soynut butter. 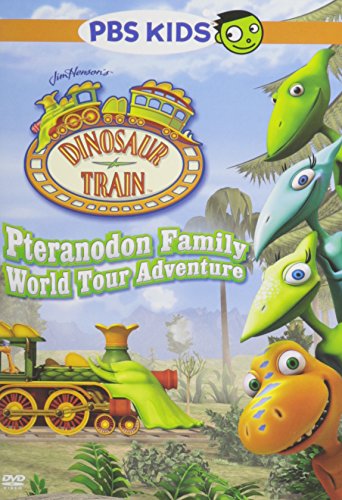 DVD, released March 15, together and learned about different species.  We also visited the Have a Brachiosaurus Picnic Activity on PBS and learned all about foods fit into an herbivore’s diet (fruits and vegetables); about the the importance of hand washing before eating; and about why all animals need to eliminate waste from their bodies (a.k.a. “poop”).

We love Dinosaur Train around here, because it has both dinosaurs and trains and encourages the kids to learn about life science while being fun.  And trust me, my preschoolers love their “saurs” and their trains!

“Pteranodon Family World Tour”: The entire Pteranodon family embarks on a roaring, exploring, World Tour adventure! They meet the Conductor’s nephew, Gilbert, and Martin Amargasaurus, a spine-spangled quadruped with an intimidating sail.
“Gilbert the Junior Conductor”: The kids play with Gilbert during their first full day on the train.
“Confuciusornis Says”: The next stop on the World Tour takes the Pteranodon family to Confuciusornis Gardens, where they meet a very wise old dinosaur.
“Tiny’s Tiny Doll”: During a stop on the tour, Tiny accidentally leaves her beloved Tiny Doll behind in Velociraptor Valley. Valerie and Velma Velociraptor enlist the help of a wide-winged Pterosaur named Ziggy to fly Tiny’s doll back to the train.
“Iggy Iguanodon”: The Pteranodon family meets Iggy Iguanodon, a large, four-legged chap who shows them his unique way of walking while leading them to some famous white cliffs.
“Shiny Can’t Sleep”: Shiny gets homesick while the Pteranodon family continues on their World Tour. She tries to fall asleep in their Sleeping Car, but can’t, so Dad takes her for a walk around the Dinosaur Train, where they observe the night activities of nocturnal creatures.
“Kenny Kentrosaurus”: As the Pteranodon family’s World Tour continues, they travel to Africa to meet a Stegosaur named Kenny Kentrosaurus.
“Don and the Troodons”: The Pteranodon family oversleeps and has to hurry to make another guided walk on their World Tour.

The kids have both repeatedly asked to make “saur sandiches” which is how they say “dinosaur sandwiches.”  It’s quite fun, letting them cut the bread and try to smear the soy butter.  Here’s a few of their better attempts.

The others ended up with missing arms or tails, or only half a head, because, c’mon, they are only 2 and 3!  We used raisins to make eyes, because a “saur has to have eyes, Mommy!” LOL.

We also tried to see how many colors we could eat in a day.  Since Mister protests all things green, it was a little harder to increase his color count!

What did you do to celebrate National Nutrition Month?